After setting up the GoRogue Helpers template and making a few basic changes to it in Part One of this tutorial series, Part Two looks to dig even deeper into the code and implement two additional features which will help manage the game’s lifecycle; a UIManager class as well as MessageLogger which will display status messages in a scrollable window.

Assuming that you completed part one, you should now have a basic game which compiles and lets you explore a fairly big dungeon map which contains static enemies that you can’t attack (yet!). From here, I created a new Git branch called “feat/ui-manager” which I used to track my changes.

The first thing that I wanted to do going forward, was to implement a proper UI manager. Fortunately, Part 8 of the Ansiware tutorial explains how to implement a UI manager in SadConsole, and we can use this code as a foundation for our UIManager class (yay open source!).

In your project directory, create a class called UIManager.cs and copy the the Ansiware code to use as a blueprint. Here I’ve modified the namespace to match my game name:

This is a lot of great base code! Note: For improved readability, I renamed Program.cs to GameLoop.cs moving forward.

Currently, the MapScreen.cs file contains the following line of code:

Since our UIManager extends the ContainerConsole base class, I wired it up to UIManager instead:

Keeping in line with Ansiware’s theme of encapsulation, the next step was to move the map generation code outside of GameLoop.cs and into the UIManager. In order to do so, I removed the references to the Map and viewport dimensions and added them to UIManager.cs instead:

Note that the ViewPort height and width are set to a public constant. This is because we still need to use them inside our GameLoop.cs to create the main window like this:

Next, we need to create the Map inside of our UIManager class, and we do so inside of the CreateConsoles() method like this:

CreateConsoles() creates all the SadConsole consoles to be managed, and makes sure that they are added as children, updated, and drawn.

Now we need to wire up the UIManager to our GameLoop. Firstly, we declare our UIManager:

and then hook in UIManager inside our init method:

At this point, if you save and run the code you should see the following window appear:

Success! Although it doesn’t look any different, the GoRogue template map generator is now hooked into our freshly minted UIManager class! This will make the next step of implementing the MessageLogger class much easier. The final step was to merge my UIManager Git branch back into master and then off to the next step!

Now that we have a working UIManger, now is a good time to setup message logger functionality. Again, I’m going to be borowing code from Ansiware, this time from Part 9 of the guide. Before diving in, I took a moment to switch to a new Git branch using git checkout -b feat/message-logger.

Next, I created a new MessageLogWindow class amd inserted the following code:

The following step was to declare the MessageLogWindow inside my UIManager class, and then add the following code to the CreateConsoles() method just below the map generation code:

Much like we did with the MapScreen, we create a MessageLog and then add it as a child of the UIManager. We then display the message log at position (0, 20), and finish display a test message. I played around with the size parameters of the MessageLog for a bit, and I liked how this looked through trial and error.

Running my code at this point produces the following result: 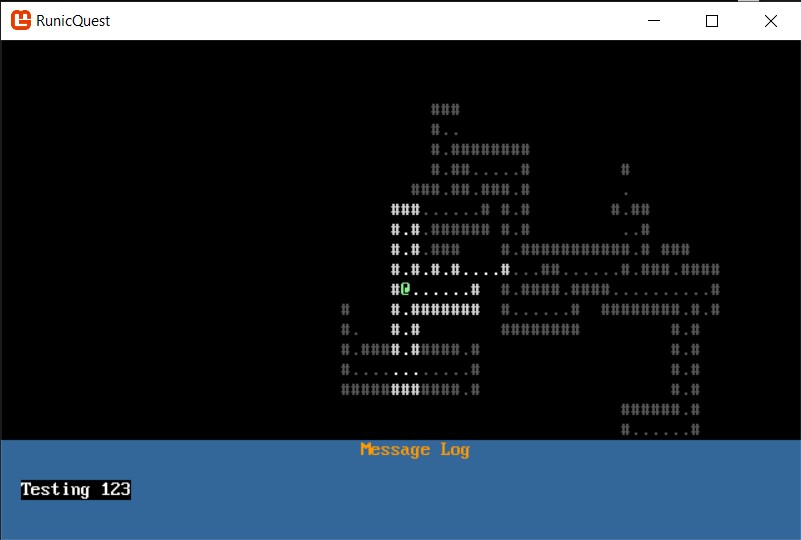 Looking good! The great part about the UI Manager is that we can move the message logger window around by dragging it should we so choose.

Add Scrolling to the Message Logger

Since a lot of action will be happening in our game, we need a way to handle streams of event text, and the best way to do so is to add a Scrollbar to our MessageLogWindow. In order to do so, take a look at Part 9 of Ansiware’s tutorial, and integrate the code he provides into your MessageLog.cs. His explanation of the MessagerLogger is terrific, and there’s no point in reinventing the wheel! This is also a great little challenge to help you stray from the tutorial a bit (and avoid tutorial purgatory! Should you get stuck, you can take a look at my commit here which was when I merged my feat/messager-logger branch into the master. Building the code at this stage looks like this: 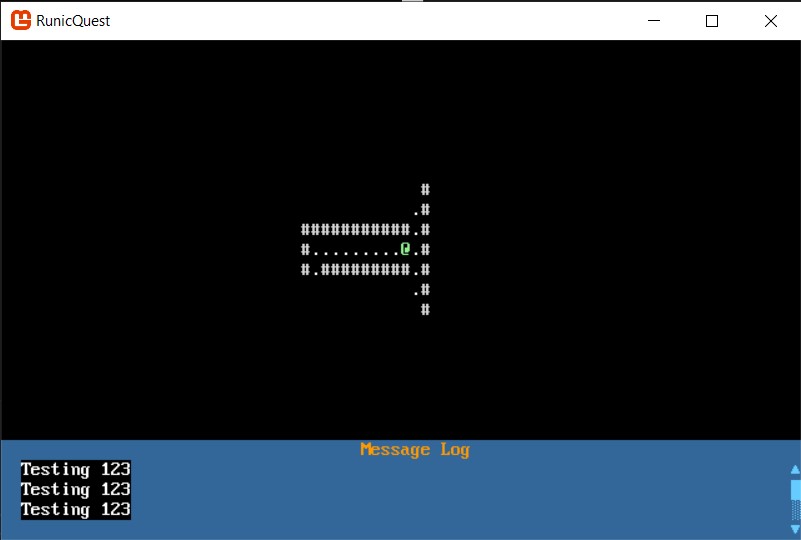 The scrollbar looks great! Not only does it display status messages it also lets us save space. Going forward, its likely that I’ll customize the colors of the window, but this will come later on when I have more base functionality in place.

As an aside, at this point I created a Github workflow in order to setup continuous integration through Github actions. With CI now setup, the next step is to write some unit tests (which I’ll be covering in a future post!).

In this part of the roguelike tutorial, we extended the functionality of our game significantly by creating a window manager and then adding both the game map and a scrolling message log! With a basic UI in place now, we can now start to think about the gameplay a bit more, and in the next step of the tutorial we’ll look into creating a basic combat system!